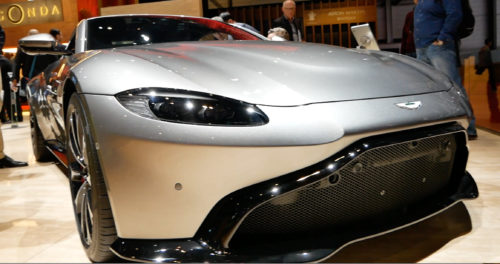 The Vantage V8 is the first Aston Martin that Andy Palmer, their CEO, has been able to oversee from the beginning, so the design stage. The new Vantage shares very little with it’s predecessor. The Chassis has been thoroughly re-worked and features new front and rear subframes, the adaptive Skyhook dampers are new and the geometry is said to be far more driver focussed than that of a DB11. Palmer says “The Vantage is a proper sports car, it’s the Aston Martin for our customers who put driving first”

An AMG 503bhp, twin-turbocharged V8 has replaced Aston’s previous naturally aspirated unit. Positioned as far back in the chassis as possible, the V8 arrives from Affalterbach in Germany with new engine management software and a new exhaust system. An eight-speed ZF gearbox is mounted on the rear axle and there’s also an electronic rear-diff. The new Vantage will accelerate to 62mph in 3.6-seconds and go on to a top speed of 195mph.

The new cabin architecture with some switchgear is recognisable from Mercedes AMG models, but a quite a lot is bespoke to the Vantage, for example the rotary and toggle switches. It’s impossible to over-estimate how important the new Vantage is to Aston Martin, the previous car sold more than 16,000 units during its 11 year life span, by far the biggest selling Aston Martin in recent times.

Aston Martin has also revealed a lighter and more powerful version of its hardcore Valkyrie Supercar. Only 25 examples of the track-only Aston Martin Valkyrie AMR Pro will be built and all have been sold at £3 million pounds each.

The Valkryie AMR Pro was developed alongside the road-going hypercar with increased power and torque from its naturally aspirated 6.5-litre Cosworth V12 engine. However, while Aston has not disclosed the official figures, AM suggests it will develop in the region of 1100bhp”. It will weight 1,000kg, while its heavily sculpted body has been designed to generate “more than its own weight in downforce”.

Adrian Newey, Red Bull Racing’s Chief Technical Officer, said: “The Aston Martin Valkyrie road car draws extensively from the knowledge I have gained during my career in Formula One, but the AMR Pro version has allowed me to work beyond the constraints of road legality”.