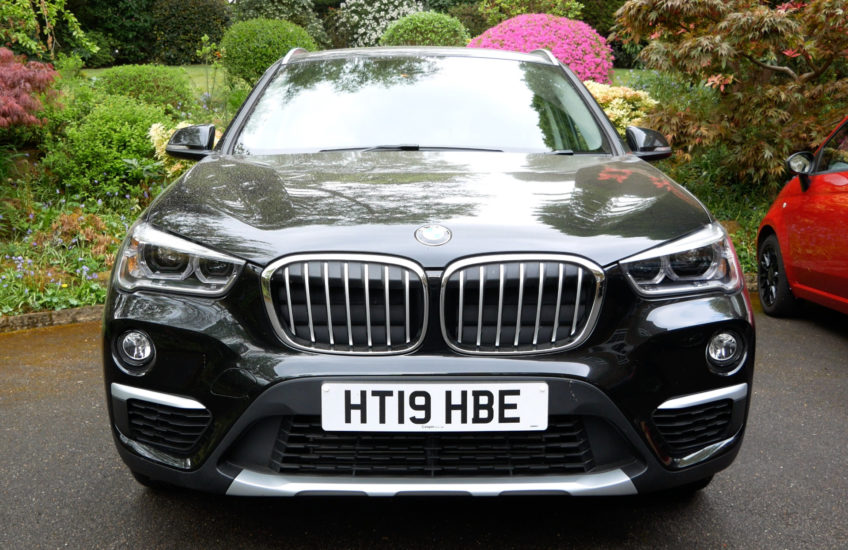 The original BMW X1 notched up global sales of 730,000 but the first thing that grabs your attention with the new BMW X1 is that it now looks the part. In the previous generation the car looked more estate car than SUV. This version is easily recognisable as the off-road variant of the genre. However looks can be deceptive, the car shown here takes the predominantly front wheel platform from the 2 Series as it’s donor offering back four wheel capability in X-Drive variants.

So the car in this video is front wheel drive. Named S-Drive it completes the 0-62mph in 9.7secs. Not fast but up the ante and the top model, the 2.0d will cover the same benchmark in 7.6secs. Entry price in around the £27K mark.

The new BMW X1 therefore has the appeal and looks of an SUV and the conventional estate car looks of the first version have been changed to show a clear family resemblance to BMW’s X3 and X5 models. The X1’s real rivals are the brand-new and really very good Volvo XC40, Jaguar’s E-Pace, the Mercedes GLA and Audi’s Q3. And of course BMW itself has just launched the X2. Billed as a coupe version of the X1 as the X4 is a coupe version of the X3. Get it?

The engines offered should cater for most tastes and include twin-turbocharged four-cylinder versions offered as diesel and petrol variants – the 148bhp S-Drive is Petrol and front wheel drive only, (and as tested here), and an X-Drive18 Diesel. The X-Drive 20d kicks out 197bhp and the X-Drive 25d 228bhp. There is also a petrol X-Drive 20i producing 188bhp.

The cabin in the main does justice to a premium-brand badge with its overall quality, and is certainly better than it’s predecessor. All plastics are of a high quality and appear durable but I really do not understand why manufactures insist on offering the infotainment screen perched on the dashboard as if it was an afterthought. Porsche do this so much better. Mid-level X-Drives are fitted with leather seats, heated front seats, and LED headlights, and the range-topping M-Sport versions offer an M-Sport highlighted interior, a bodykit of sorts, alloys, and sports suspension.

BMW is not however overly generous with the X1’s basic specification. The trim in SE form has iDrive and a 6.5in multimedia system with navigation, DAB radio, CD player, USB connectivity and Bluetooth media streaming but the screen in particular looks far to small and basic, though this can be upgraded apparently. The i-drive system, however, works well and is intuitive to use, more than be said of many other manufactures offerings.

According to Autocar ‘the car turns in smartly and resists understeer well as lateral loads build. It remains stable at all times, which in a relatively high-sided car is more important than mixing greater body roll with greater off-throttle handling balance and flirting with unwelcome oversteer’. This would mirror our own experiences on the road but we have not had the chance to drive this car on the track, although not quite sure why you would want to!

The fuel economy and CO2 emissions are just about competitive. However an average of 33.6mpg over almost a 1000 miles does seem low especially as we are now averaging 36mpg overall in our Hybrid Panamera.