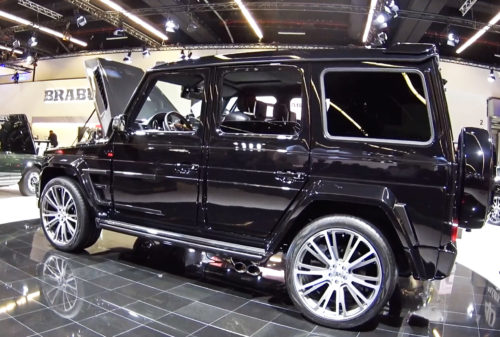 What can you say about Brabus. Well you could say these cars are insane cars for insane people. Well maybe, but at ss8000cars we love the Brabus G Wagon. However to judge the G Wagon by any normal criteria would be pointless because even in G63 form the G Wagon has too much power to handle. Here it is all about having TOO much of everything but the end result is simply magnificent!!!!!

The 900 Rocket produces a crazy 900 horsepower and 1,106 lb-ft of torque from its bored-out 6.3-litre twin-turbocharged V12 engine. A power level of this caliber requires a significant engine overhaul, with Brabus installing enlarged cylinder bores, forged pistons, billet connecting rods, bigger turbochargers, a new intake (aided by that massive air scoop in the hood) and a reworked exhaust system, among much more. The result is a 6,250 lb SUV that will hustle from 0-62 mph in 3.9 seconds and reach an electronically limited top speed of over 168 mph.

Just 10 examples of the Brabus 900 Rocket will be built – a figure that the German company is determined to stick to. Pricing is likely to be around £450K, yes that’s £450,000, but it’s likely that you don’t mind what it costs if you’re one of the 10 people looking to get their hands on this seriously insane SUV.

Brabus also restore old Mercs to their former glory, just look at the workmanship involved in some of the finished cars on their 2 stands. Love to own one of these iconic classics.