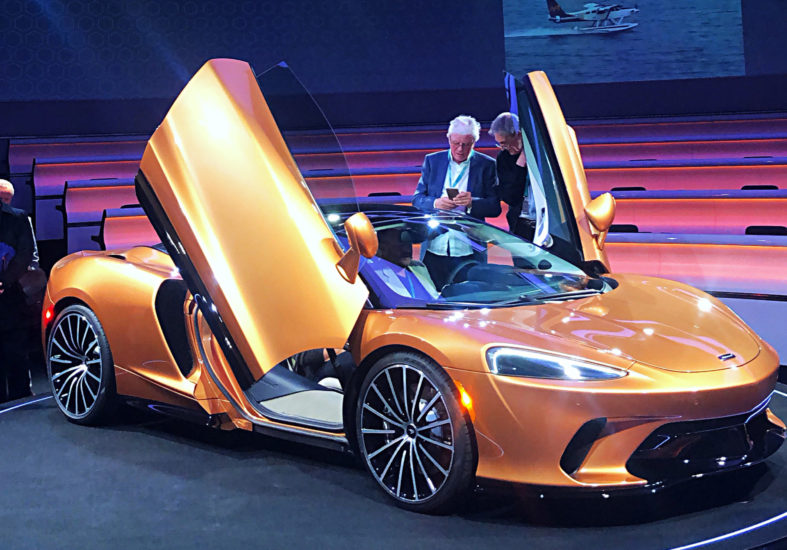 McLaren have launched the new GT, a car that they say creates a completely new market niche for them. Their previous GT model was a derivative of the 570S and therefore based on their sports platform. The new car is based around the Carbon Monocell 2 tubular chassis but is effectively a new platform which will sit alongside the Sports and Super Series in it’s own right. The GT Category.

Much of the low weight, 1530kgs, has been achieved thanks to the McLaren’s carbon fibre chassis and in the GT it incorporates a new rear upper structure which helps increase the overall luggage capacity, one of the key ingredients required of a Grand Tourer.

McLaren has asked Pirelli to develop a bespoke P Zero tyre to balance performance driving as well as provide an extremely compliant ride. For the first time McLaren offers 20in front and 21in rear wheels on their cars.

The McLaren GT is aimed squarely at the Aston Martin DB11, the Bentley Continental GT and the Ferrari Portofino. Though not a GT per say the Porsche 911 is also in the mix due to its overall capabilities. But I suspect with this car McLaren are also hoping to take sales from their Supercar Competitors, so from Ferrari and Lamborghini. This is clearly a car, from a technical perspective, that can do both.

Rear quarter windows add glass into the rear quarters in the same way that can be seen on the 720S Spider, this improves rear visibility and along with the optional glass sunroof also improves cabin ambience. The GT does retain the trademark dihedral doors.

Once inside it is clear that you are in a McLaren and the major instruments lean heavily on the sports series combining McLaren’s minimalist approach with new luxury in keeping with its GT moniker. Electric and heated seats are heavily bolstered and unique to the GT and they are designed to combine long-distance comfort with lateral support for more spirited driving. Additional features include new ambient lighting, a Bowers and Wilkins sound system and a new electrochromic roof panel that can lighten or darken the glass at the press of a button.

McLaren’s has re-developed their 4.0-litre twin-turbocharged V8 engine for it’s new duties in the GT, now offering 612bhp, and 465lb ft of torque. 0-60mph takes just 3.2secs, with the more relevant 0-124mph figure taking just nine seconds, this shows a clean pair of heels to the GT’s competition. The car has a top speed of 203mph.

McLaren say that of primary importance to the GT is the balance they have achieved between their traditional driving dynamics and new levels of comfort and refinement. Work to reduce vibrations and noise from the stiff structure, including softer engine mounts and increased sound insulation, make sure that the GT is the most refined model they have built to-date. We have found in the past with McLarens, especially with our 675LT, that from time to time you can feel the vibrations pass through the chassis into the cabin especially at lower speeds.

The suspension, like the steering and brakes, is unique to the McLaren GT. McLaren have made use of hydraulic dampers and computer software, named ‘Proactive Damping Control’, which takes input from sensors scanning the road ahead allowing the suspension to react to what is coming in miliseconds. Comfort mode gives a particularly compliant ride say McLaren.

The GT is priced at £163,000 in the UK and deliveries should begin around the end of this year.