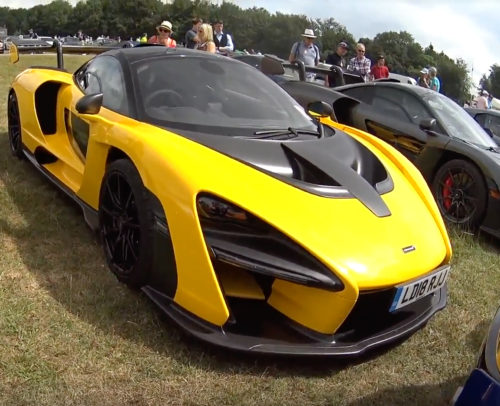 The Senna was shown to McLaren’s loyal customer base at the McLaren Winter Ball last December and released to the press almost immediately after. The Senna name evokes possibly the most admired Racing Driver of all time, Ayrton Senna, and promotes his previous connection to the McLaren brand.

The focus of the McLaren Senna is to achieve as light a weight as possible and to be hugely powerful, representing overall the pinnacle of McLaren achievements. Carbon-fiber components abound together with extreme aerodynamics. Powered by a twin-turbo 4.0-liter V-8 making 789 hp and 590 lb-ft of torque, it’s uncompromised exterior has a spartan interior stripped from normal creature comforts, though it is far from uncomfortable inside once you are installed. The total production run of 500 units is closed in spite of a price tag of 750,000 pounds plus taxes.

The McLaren Senna has a lot to ruminate about. Primarily designed for track use, the car is road legal, though where the front numberplate is to be positioned is not obvious, but it is so extreme in design terms that occasional use to shows, or into London to show-off, combined with the ability to travel to the circuit that you intend to race at are it’s most likely uses. This is a car that is all about the weight saving program culminating in the development of a new lighter carbon fibre.

McLaren has taken the 720S engine as it’s base and increased the power produced from 710bhp to 789bhp together with 590 lb-ft of torque. The hybrid system first seen in the P1 is nowhere in evidence and the Senna weighs in at 1198kg making it the lightest car McLaren has produced for the road.

The styling is more controversial, it is certainly brutal rather than beautiful, the consequence of a mission to achieve the lowest kerb weight combined with extreme aero-dynamics, but to these eyes the uncompromising approach taken has produced a car that is beautiful in it’ own right and in it’s own way. A wondrous thing!

The Senna will drop nearly two inches into Race mode to reduce drag and increase aero grip. The rear wing, itself a controversial styling item because it is fitted well forward of the normal positioning for such a component, can tilt forward to increase downforce or backwards to improve speed in a straight line. It also acts as an air-brake by moving to the vertical position when maximum braking is required.

I love it that McLaren has seen to create a car that is at the very leading boundaries what is achievable and is totally unspoilt by the need to play to anyone’s view of conventional beauty. This is truly function before form and this car will remain completely unique in the automotive world

SECOND ONE FROM SENNA VIDEO

McLaren claim the new Senna is the most extreme road car it has built to-date. However clearly cohesive design was not first on the list of their priorities but it has to be said the Senna has purpose. The car is primarily controlled by the need for aerodynamic efficiency, so 800kg of downforce is exerted on the rear of the car forcing it onto the tarmac at speeds above 155mph.

The Senna is the next Hyper-car in McLaren’s Ultimate Series. First came the P1, which this car is not a direct replacement for. Instead it has been produced to set new standards in track performance. The proof of the pudding, so to speak, will be in how fast McLaren can navigate the Nordschleife and to gain any credibility it must beat the Porsche GT2RS and I believe by a margin. The GT2RS holds the current production car record lapping the Nurburgring in 6:47.3

And the McLaren Senna is entirely road legal, quite an achievement I imagine to get the car through the legislative process especially with that rather large rear wing. The car is built around the familiar McLaren carbon tub and powered by the same 4.0-litre twin turbo V8 from the 720S, albeit in a different state of tune. This engine has a new camshaft, new pistons, intake manifold, and an Inconel exhaust. Overall power developed is 789bhp with 590lb ft of torque. All powering the rear wheels through a seven-speed twin clutch gearbox. The result is striking, powering the car from 0- 62mph in 2.8seconds and 0-124mph in 6.8secs, top speed is 208mph. Compare this to our 675 LT, 0-124mph of 7.9secs or the 720S of 7.8secs.

Weight rather than pure power has been the focus and therefore crucial in the Senna’s development. McLaren says the rear wing is able to support up to 100 times its own weight, each front wing weighs 660 grams and the door mechanisms have been changed, all combined to reduce weight by 20 per cent overall, so the car weighs in at 1,198kg dry. Pretty impressive! The 675LT weighs in at 1,230kg.

500 cars will be produced in total, each having a starting price of £750,000 before extras. Many Sennas will end up costing in excess of £1 million especially if specified in the optional and fully exposed Carbon fibre like the one ordered by Bruno Senna, nephew of the late Ayrton Senna and whose name has been lent to the car.