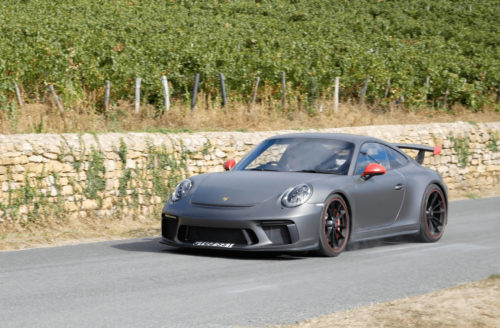 The changes on the 991-2 version of the GT3 have kept the GT3 at the top of it’s game and the £112,000 list price seems extremely competitive, ours being £137,500 with extras. It’s only real competitor, the Merc AMG GTR, with the same level of extras is likely to cost in excess of 165K and with the GT3 being oversubscribed I expect it to hold it’s value well, much as GT3’s have done in the past.

At the heart of the car is the engine and this is quite simply spectacular. A naturally aspirated flat six now displacing 4-litres for the first time in a GT3. Will be the last naturally aspirated unit produced if the Cup Car goes Turbo and It has the ability to rev out to a full and outrageous 9,000rpm. Maximum power has climbed from 468bhp to 493bhp, (500hp), and 339lb-ft of torque achieved by using the 4.0-litre engine from the 911 GT3 Cup car to replace the previous 3.8-litre unit. Porsche reports It’s ‘virtually unchanged’ between road and race variants except for the exhaust system and this engine also forms the basis for the Gen 2 GT3RS.

A new aero package, with a higher rear wing and set back further than in the previous generation car, produces 20% more downforce without any increase in drag. This is identical to the 991 Gen 1 GT3RS with it’s huge rear wing, which is overall a quite extraordinary feat. New air intakes on-top of the engine cover compete the package. The GT3 sits ‘around’ 25mm lower than the standard Carrera S, and comes with rear-wheel steering and dynamic engine mounts as standard

The suspension is firmer at the front than the previous gen GT3 which contributes to stability at speed as well as giving additional feedback through the steering wheel. This is simply the best electronic rack I have ever experienced, delete that, this is the best steering, in terms of feedback, of any car I have driven, including the Lambo Huracan Performante and our McLaren 675LT. Helper springs allow incredibly light main rear springs to be used so the rear suspension is now all but the same as the GT3RS, snuff said I think!! Steel 380mm brake discs are standard, with 410 & 390mm carbon discs an option.