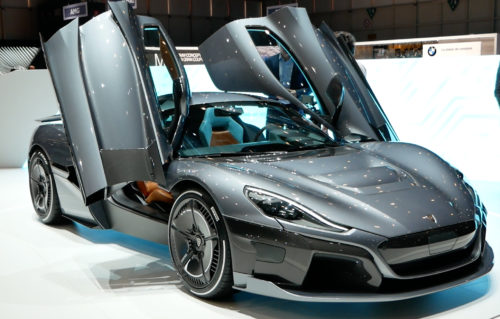 This is Rimac’s second electric car. The Concept 2. This car uses a 120kWh lithium battery and produces 1888bhp. Thats right 1888bhp! It uses four electric motors positioned at each wheel to achieve the 0-60 benchmark in 1.85secs and 0-100 in 4.3secs. (Compare this with the figures claimed for the upcoming Tesla Roadster of 1.9 and 4.2 respectively). Top speed is said to be around 260mph

Remember what happened to the Concept One it had a minor shunt in the hands of Richard Hammond of the Grand Tour. Worrying was not the fact that Richard binned it but more the way it was consumed in flames in such a short space of time.

The body and monocell are in the main made from carbonfibre and feature double wishbone suspension with electronically controlled dampers with active ride height.

Each motor has a one speed gearbox for the front wheels and two, two speed gearboxes for each rear wheel. Huge Carbon Ceramics should slow the Rimac down fast from high speed, 390mm’s on the front! Overall range is said to be 400miles but if you see anywhere near that I would be astonished. 2 laps of the Nurburgring are possible on full charge, so thats 26 mile range on full charge.

The car has a number of unique features such as facial recognition to unlock the car, hope it works on a rainy night! Together with Level 4 autonomous driving for when you are able to take advantage of such technology.

The Rimac is scheduled to go into production in early 2019 and will cost close to 2 million pounds. 150 will be built.

We wish Rimac luck but they are not only a car manufacturer but also provide Hybrid Systems to other car manufactures such as the Aston Martin with the Valkyrie!