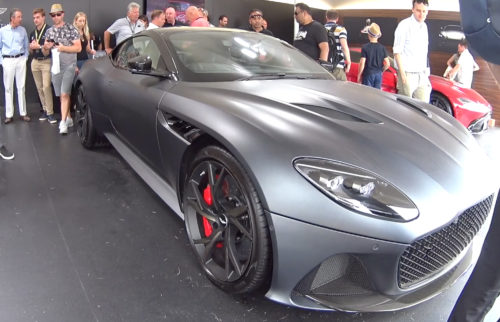 Introducing the Aston Martin DBS Superleggera. A worthy replacement for the Vanquish I hear you say……….well not really, apparently the Vanquish name is being saved for the up-coming mid-engined Aston so this is really a souped up DB11. Notwithstanding this the Superleggera is a great looking car, just look at the pumped up arches and 21inch wheels. Stunning in my eyes. Superleggera as I am sure you know means super lightweight, a historical name used by AM on the DB5 and DB6. However in the DBS’s case hardly appropriate since the car weighs in at 1693kgs dry so say 1800kg with fluids. Seems strange that AM have chosen to use this name on the DBS since this car is a full blown GT and the V8 Vantage is really their Sports car in the line-up. However fret not this machine now has 715bhp and 663lb ft of torque from it’s 5.2 litre V12 engine and this means that probably it’s only competitor is the 812 Superfast Ferrari which has more power, 789bhp, but significantly less torque, 529lb ft. With these machines it is the torque that you notice the most in every day driving.

In spite of this it is the 812 that monsters it’s way to 100km/h in 2.9 secs against 3.4 for the DBS, Both claim a top speed of 211mph. Underneath the DBS uses the same aluminium platform that underpins all Astons of recent times and as I think it is fairly obvious it uses the same wheelbase, suspension and steering from the DB11, though suitably modified for their hard core use. Carbon ceramics are standard as perhaps they should be for the £225,000 list price. This car also uses a new heavily modified gearbox, an 8 speed ZF unit, to handle the increases in torque with a mechanical limited-slip differential. Although the transmission changes gear quickly it is still not as dynamic as the best twin clutch systems. For pottering around in traffic or continental dashes though it is probably the more appropriate system. Remember this cars primary purpose is a a GT.

And if being judged as such I suggest the only real downside of the DBS is the interior which put simply does not have the class of say a new Bentley GT. Or even the latest Porsche Panamera! This is a DB11 interior which even in this car, in this testers opinion, fails to meet the standards of a £160,000 car let alone one costing north of £250K with extras. WE’ve said it before and we say it again, this car deserves better in this respect.

However driving fluency is one of the cars highlights according to Matt Sunders of Autocar, The Company’s mastery of 21st century power steering, power braking, adaptive damping and stability control systems has blossomed with this car…..the blend of suppleness, support, stability, response, balance and body control in spite of being a big car is a wonder to behold. And the DBS does not feel that big on the road possessing the precision and directional agility you might expect of a sports car. Indeed Matt sums up by saying that this car hits new levels of real-world performance, drivability, dynamic sophistication and involvement. Praise indeed and we should be able to confirm this soon with our own drive.