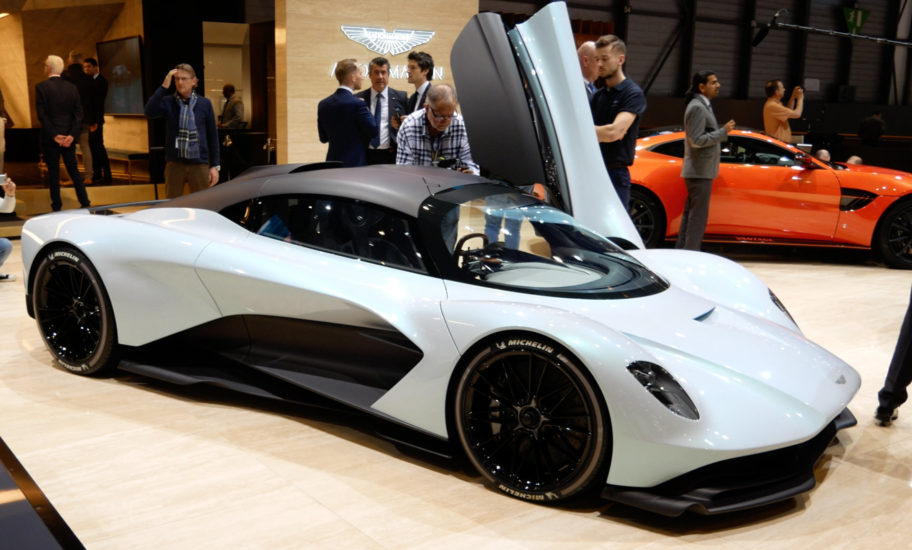 Aston Martin stand have not one but three mid-engined Supercars on display. A working Valkyrie with the new V12 Cosworth engine in situ, Son of Valkyrie, the AM-RB-003, and the Vanquish Vision Concept. Cost of this car has not been announced but the smart money is on a price set just below a million pounds.

Where to start, well the the Vanquish Vision Concept will be subject to a separate video so we focus in this video on the AM-RB-003. Personally I am very excited for AM, the pace of progress with this Manufacturer is nothing short of astonishing under the guidance of its CEO Andy Palmer, and Aston Martin announce another Hyper-car sitting below the Valkyrie but still with astonishing performance and pitched at the very high end, likely to be competing with the next generations of La Ferrari, Porsche 918, and the McLaren P1.

First and foremost the car is stunning both inside and out and sets the bar for future Astons and indeed future Hyper-cars. It will feature a brand new, Aston in-house developed, twin turbo V6 cylinder engine featuring some levels of hybridisation, class leading Aston states. This will drive the rear wheels with a P4 electric motor or motors driving the front axel. Power is likely to be north of 1000hp combined. This is a carbon tub, carbon bodied car.

‘There will be further technology transfer from the Valkyrie Hyper-car to the AM-RB 003 through the active suspension and electronic systems, with Aston claiming the dynamic brief for the car is to be class-leading on both road and track’ Autocar.

Red Bull have been closely involved in the design of this car and as Adrian Newey has said ‘Aero in King’. And you can see the evidence of this all around the car. Sweeping ducts and aero design abound and a lot of thought has been given to the vortices that flow/ race around the car in order to provide maximum stability at speed, look at the rear diffuser! Aston recently set up a studio in Red Bull’s headquarters at Milton Keynes in order to be immersed in the design philosophies of the F1 Racing Car because these are becoming the rules on which Supercars and Hyper-cars are now based. Airflow around the car being one, and this is the reason that both the RB-003 and Vanquish Vision Concept will be developed, from a design standpoint, at Red Bull.

Unlike the Valkyrie where weight, or lack of it, was totally crucial to the overall project, so to keep this car below the 1000kg level, this whilst important, not as much of a priority here. This can be seen clearly in the design of the cabin, which although still compact in overall terms, is positively roomy. I was one of the few Journalists to be allowed to sit in the car and it is an amazing driving environment. The front screen has been pushed well forward as have the A pillars and you can see the front dimensions by way of the wheel arches of the car quite easily which is unusual in this type of car.

New ideas abound from the 3D printed carbon on the centre consul to the design of the air vents which pan from one side of the facia to the other. A new rear facing mirror which is linked to cameras around the car, there is no view out the back, to the main instrument panel which is small by designation with only the information the driver actually needs in front of them. Aston has also started a debate about the infotainment centre. Does this need to be a huge PC type screen or will your phone, plugged into the car’s diagnostics and central management system, suffice. Most car infotainment systems become obsolete within a few years and a lot of people use their phones in any case. Interesting!

There are no performance figures available right now but expect figures that are very very close to those likely from the Valkyrie. This from a car that will cost less than half the Valkyrie’s cost.

On the stand was Valkyrie Verification Prototype 001 equipped for the first time with the Cosworth V12 Engine, displacing 6500cc, and with an 11,000rpm limiter. It has now been confirmed that the Valkyrie will produce 1,160bhp and weigh in around the 1,100kg mark so performance will be off the scale. The interior also looks to be close to the final product with the camera wing mirrors on either side of the cabin with the infotainment screen installed centrally. The main steering wheel houses the basic information required by the driver, so rpm counter, speedometer, gear selection etc. But the overriding emotion that will be experienced I imagine will come from the noise that this V12 makes at 11000rpm