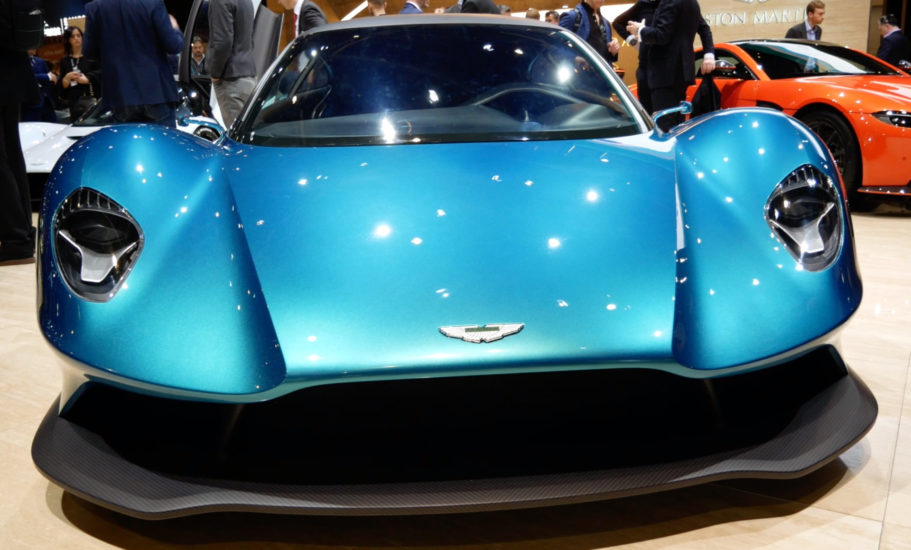 Perhaps Aston’s most important new car; The mid-engined supercar to rival V8 Ferraris and McLarens. We have already been on the stand to review the Valkyrie and AM-RB-003 which are part of another video but I am astonished by Aston’s focus on getting the job done right now as part of their 7 year plan.

First off it was stressed to me that this car is very much a concept and the styling leans heavily on the Valkyrie and RB-003. The finished article may not be as sculptured as the Vision Concept but be assured Aston know, having whetted potential customer appetites, they cannot afford not to deliver on the styling.

And my goodness are Aston making exciting cars right now but even more relevant they are beautiful forward looking cars. Understanding the heritage but not being constrained by it. The AM-RB-003 is perhaps the most aggressive and beautiful combination in a car that I have ever seen and the Vanquish Vision Concept follows the same theme. However we shall have to wait until the final pictures are released to see just how beautiful. But the point is fast and aerodynamic cars with serious amounts of downforce can be beautiful even if their natural habitat is the track.

AM’s first truly in-house developed twin turbo V6 from the RB-003 will also power this car albeit in a reduced state of tune and there will be some hybrid technology though not we are told to the same extent as the 003. 700bhp plus is the current industry standard as in the F8 Tributo and 720S, so expect 750bhp plus in this car because this is where the competition will be when the Vanquish Vision Concept gets to market at the back end of 2021 or perhaps Geneva 2022? The car will weigh in around 1350kgs but will not be made from Carbon like its more expensive siblings. Body is likely to be Aluminium because AM has a lot of experience in using this metal and the tub Aston says will be a Aluminium-carbon mix. They refused to be drawn on this further.

Styling is gorgeous with the race inspired front diffuser and the rear has similarities to both the first generation Vanquish and to some extent to the previous DBS. No question there will be shared components with it’s bigger brothers but the price point of this car will limit how extreme the aerodynamics can be for example.

I am overall so excited for AM. This company has gone from strength to strength recently and now it’s shares are traded on the London Stock Market so seems to have the investment available it could once have only dreamt about. A good long term investment, maybe!