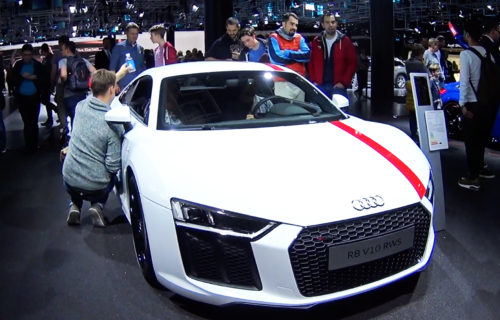 This was another show surprise for me guys, the newly introduced, limited edition R8 Coupe and Spyder V10 Rear-wheel drive. I am now a committed enthusiast of Audi Sport, their cars at the show were awesome! Watch this space because I am keen to experience the ownership experience of a new R8!

Previously all models produced by Audi Sport, formerly the Quattro division, came with the ‘Quattro’ all-wheel-drive system. The new R8 V10 RWS is aimed at “purists”, according to Audi Sport GmbH boss Stephan Winkelman. “A limited-edition special model for customers with an appreciation for essential driving enjoyment, the R8 V10 RWS is an absolutely exclusive offer,” he said.

Following hard on the footsteps of Porsche with the previous GT3 based 911R and recently announced GT3 Touring, both with manual gearboxes only. Though the donor cars were only ever 2 wheel drive, Porsche claims they are totally focused on the purist.

“With its mid-mounted V10 engine and rear-wheel drive, it successfully brings the driving concept of our R8 LMS racing car to the streets.” says Stephan Winkelman. The ten-cylinder engine is one of the most evocative engines in the world being one of the last to be naturally aspirated…..Probably. Producing 533bhp and emitting a spine chilling noise, it can launch the Coupe R8 to 62mph in 3.7 seconds and the Spyder in 3.8.

The rear-wheel-drive R8 weighs in around 50kg less than its all-wheel-drive counterpart, thanks in the main to the reduction in mechanical components for the drivetrain. Audi says the chassis setup and control systems enable “controlled drifts” on selecting the appropriate mode.