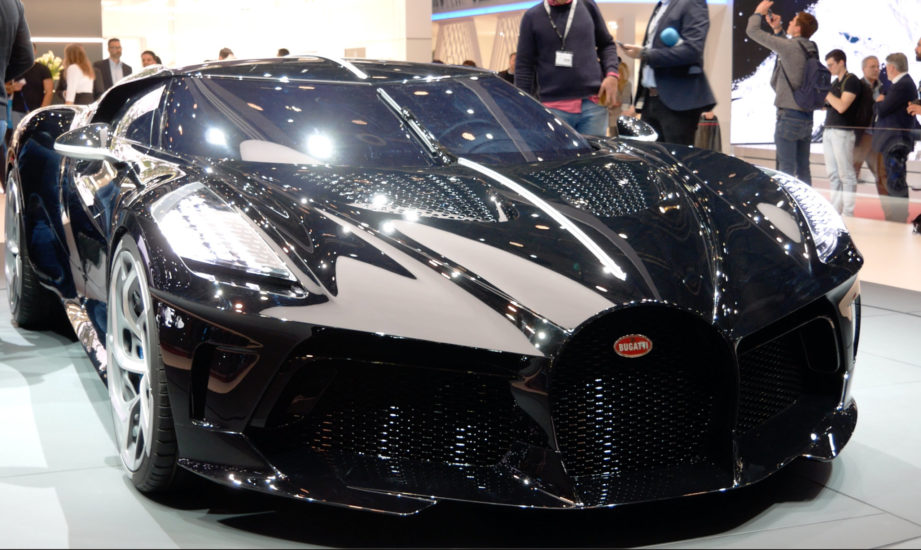 Hey guys, We take a trip to the Bugatti stand where there are three Bugattis on show, the Bugatti 110ans celebration car which is essentially a Chiron decked out with the French flag on the wing mirrors and underneath the rear spoiler, the Bugatti Divo a car based on the Chiron but more sporting in nature and sold with a limited run of 50 cars priced around 3million Euros and the One of One La Voiture Noir which is a model built for one lucky, and wealthy’ customer and cost around 16.7 million Euros. Absolutely stunning but 17 mil is a lot!

The Type 57 SC Atlantic, on which La Voiture Noir was based, was created by Ettore Bugatti’s eldest son Jean, With its homage to the fourth, all-black Atlantic, missing since the Second World War after the Nazis had overrun the Bugatti Factory La Voiture Noir was sent by train to Bordeaux. It never arrived. BUGATTI is bringing the speed, technology, luxury and aesthetics of an icon into a new era. But the customised creation of “La Voiture Noire” is far more than a modern interpretation of the ghost of the gran turismo. “La Voiture Noire” is a tribute to BUGATTI’s own history, a manifesto of the BUGATTI aesthetic and a piece of automotive haute couture’. Bugatti.

‘La Voiture Noire’ is an extraordinary looking machine that uses the Chiron as its basis, with the familiar 1500bhp, 8.0-litre, quad-turbocharged, 16-cylinder underneath. The CEO of Bugatti, Stephan Winkelmann, says “Customers expect us to continually surprise them and to move the goalposts beyond the limits of their imagination. We have just succeeded in doing so with ‘La Voiture Noire’,” he says. Indeed.

At the front, La Voiture Noire looks more seductive and less menacing than the Chiron. “I wanted ‘LVN’ to have a face,” Salomé the designer explains, “which is why the headlights are more expressive. The way the front fenders crest is also part of that.” The cockpit glass area has a visor-like look, and despite its none-more-black paint finish, the car’s form changes according to whatever reflections are playing across it. La Voiture Noire looks magnificent in the flesh. I should say that Bugatti’s legacy is in safe hands.

On the Bentley stand Bentley is celebrating it’s 100th anniversary, Mulliner has created something unique to mark the occasion – The Continental GT Number 9 Edition. Only 100 of these cars will ever be produced. The Number 9 Edition pays tribute to Bentley’s proud racing heritage and to one of the most influential figures in the company’s history.

This limited Edition Continental GT features a series of interior and exterior design tributes to one of the most famous cars in Bentley’s history – the No. 9 Blower. The original No. 9 is famed for breaking records, wowing spectators and capturing hearts and minds during the 1920s and 1930s. The character of the car made it an instant favourite and an enduring legend of motor racing.