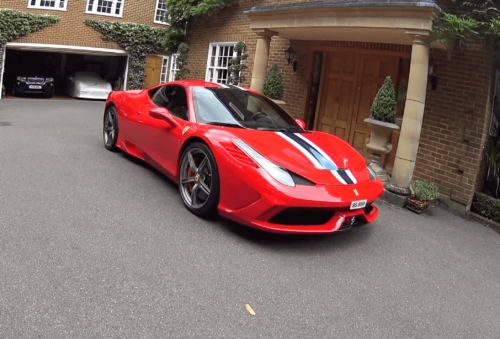 The 458 Speciale is truly an exceptional car. The 458 was widely considered to be one of the most beautiful Ferraris ever produced, and my goodness there have been a number of them, combining power from its naturally aspirated engine with a sculptured shape that looks beautiful from almost every angle. the Speciale retains those looks but adds purpose and aggression into the equation. The fact that no large spoilers have been added, save a small raising of the rear bodywork to increase downforce, is quite remarkable. Ferrari have relied on active aerodynamics to achieve the levels of stability required by a car with this kind of performance.

600hp at 9000rpm in a car weighing in at 1290kg. Faster than an Enzo around Ferrari’s own Fiorano race track. This endows the Speciale with 0-60mph times of under 3 seconds and a top speed of over 200mph. However it is the handling that has come in for the highest praise from the pundits.

Evo mag said of the Speciale immediately after it won their 2014 car of the year Award, ‘The standard 458 isn’t exactly lacking, but the Speciale still brought the game forward by a whole chunk. Rapid, pointy, and yet still very approachable’.

Autocar said when naming the Speciale their Car of the Year, ‘The mid-engined Ferrari supercar has reached a turning point, it strikes us – and there may never be a better one for purist thrill-seekers than the one you see here’.

Ferrari said ‘The award-winning Ferrari 458 Speciale continues to collect the accolades from the world’s motoring press, this time from EVO, with all 7 judges on the Car of the Year 2014 panel unanimously voting the Ferrari their No1 choice. In fact, this is the first time that any car has been voted as the winning car by all eCOTY judges, with comments such as: “It’s as pure a driving experience as you can imagine.” EVO also concluded: “Neat and tidy, or fast and loose, it always rises to the occasion, nailing apices with pinpoint accuracy or cremating its rear tyres with abandon. It flatters your driving, but still tests your ability.’