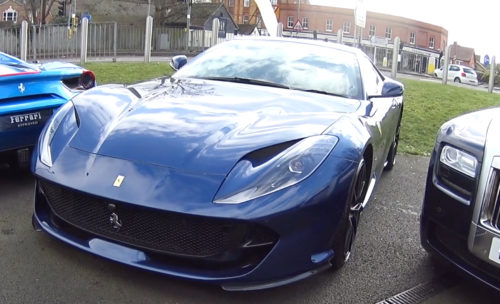 The 812 Superfast is the latest V12 Supercar from Ferrari and replaces the F12. It has a front mid-mounted 6.5-litre V12 engine that makes 800hp at 8,500rpm. The engine is naturally aspirated and the 812 has the same output as found in Ferrari’s La Ferrari sans electric motors. Up-to 80% of the 526lb ft of torque is available from 3,500rpm.

Despite the front mid-engined layout the 812 Superfast has handling and roadholding to match its rear mid-engined siblings. It has Ferrari’s latest Side Slip Angle Control, as well as Virtual Short Wheelbase which has been developed from the F12tdf’s four-wheel-steering system.

The 812’s V12 engine and seven-speed dual clutch gearbox, (which has shorter, closer stacked ratios than the F12, with 30 per cent faster upshift times and 40 per cent quicker downshifts), has advanced electronics plus new aerodynamics to help manage it’s 800hp.

At the front there’s now electric power steering with variable torque assistance. The system is designed to help you apply opposite lock when the rear end steps out of line and this it does pretty effectively.

And at the back, as mentioned, there’s a new electronic four wheel-steering system that increases stability at higher speeds whilst improving turn in response. Together with a new electronic differential and a fifth generation version of Ferrari’s side slip control system, this creates a Virtual Short Wheelbase, which is managed via the tradition mannetino switch on the steering wheel.

The brakes are by Brembo and feature 398mm carbon ceramic discs at the front and 360mm at the back and the tyres are Pirelli P-Zeros. Ferrari wants the 812 to be seen as a road car first and foremost, rather than as a track weapon that is also road legal.

The aero on the 812 is extremely advanced and features passive flaps on each side at the front that open above 200kmh to stall the underbody diffuser. There’s also an active electronic wing at the back and huge scoops on the sides to manage the airflow over and around the car. The overall result is considerably more downforce as well as less drag than in an F12.

There are some issues; firstly in our opinion the looks are less pleasing than on the F12 due to the new aerodynamic elements along the car’s flanks and also at the rear; Second, in practice its new electronic power steering is even more hyper-active in its responses than in the F12, due in part to the new rear-wheel steering system,. This whilst improving turn in, takes some getting used to.

Overall we liked this car a lot and the power is simply intoxicating. Though how much power it is possible to deploy safely in these cars going forward is open to question? This car may also be the last of it’s breed with the next version going to hybrid power.