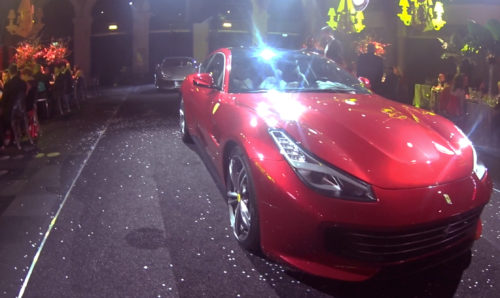 A little later than planned our video of the Launch of the GTC4 Lusso in London. A car close to my heart having owned the FF that Tim Burton, alias Shmee, now drives. A car that I miss….a lot!

The car uses an improved version (dubbed 4RM Evo) of Ferrari’s patented four-wheel drive system introduced on the FF, integrated with four-wheel steering. The engine still make the same glorious sounds as the FF, always was louder than the F12, and is arguably the best naturally aspirated V12 in the world.

The infotainment is upgraded with an all-new 10.3-inch touchscreen accompanied by a dedicated knob-and-button interface. Combined, these make quick work of audio, phone, and ventilation needs. The system is fast and intuitive and has usable controls—a rare trifecta, particularly among low-volume carmakers.

However the one point that you might want to know is that however big the GTC4 Lusso is, and it is big the size of an Audi RS6, when you are on it, as in the FF, the whole car shrinks around you and can be driven like a much smaller supercar, really! And in the end this is the reason that you will want one, it can do the GT when you want and then turn the wick up-to 9/10 and it delivers in a way no other GT can, the new Panamera is just too soft to hold a candle to this car.

Love the new rear light design, four lights as opposed to two like my 575. Wonderful.