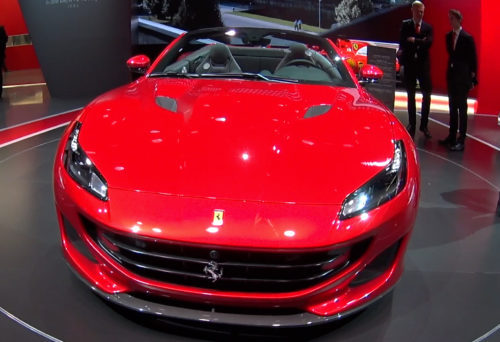 The engine, although based on the California T, receives a major overhaul. New pistons, conrods, intake system and exhaust manifolds have gained 39bhp, giving a the total output of 592bhp at 7500rpm, and torque of 560lb ft available at 3000rpm.

The car also benefits from Ferrari’s E-Diff3, an electronic limited slip differential that actively distributes torque to either of the rear wheels as it senses is appropriate. At 1664kg the Portofino is about 70kg lighter than the California T, and the weight distribution split is 46-54.

The 812 Superfast has a front-mid-mounted 6.5-litre V12 engine, maybe the last, that has a gargantuan 800hp at 8,500rpm. This is a naturally aspirated engine with not a turbo-charger in sight and the 812 has the same output as found in Ferrari’s La Ferrari.

Despite the front-engined layout the 812 Superfast should have handling and roadholding to match its mid-engined siblings. The car’s specification includes Ferrari’s Side Slip Angle Control, as well as a system called Virtual Short Wheelbase. It’s been developed from the F12tdf’s four-wheel-steering system.