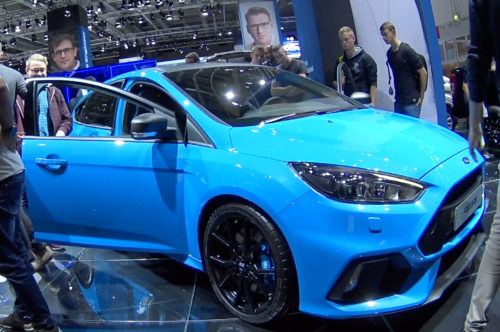 The Golf R, first shown at the Geneva Show, is still relatively new I have yet to see one on UK roads, so the R’s trick LED lights and marginally redrawn bumpers aren’t a huge change over the current model.

Passion from the enthusiast community apparently led Ford to introduce a new version of its critically acclaimed Focus RS.

In the Golf R the 2.0-litre turbo engine’s power output is up from 296bhp to an Audi S3-matching 306bhp and the ageing six-speed DSG transmission is replaced by a faster seven-speed dual-clutch system. That will therefore mean shorter gearing and more speed for the 52 per cent or so of Golf R buyers who opt for it.

According to VW the new R launches to 62mph in 4.6 seconds, 0.3sec quicker than the old car but testers have reported that 4.5 was achievable in the old DSG equipped car so could this new version really giant-kill the likes of the Mercedes-AMG A45 and Audi RS3 saloon, cars costing up-to £10K more?

The DSG gearbox is completely new and now features seven speeds It’s a wet clutch unit, and VW claims that intelligent operation of the oil pump and reducing internal friction make it more efficient than the old ‘box, so that’s faster to you and I.

Inside, the R gets all the mk7.5 upgrades, including the full width (12.3in) high-resolution display in front of the driver, and the option of a 9.2in Discover Navigation Pro infotainment system with its glossy touchscreen.

The new 2018 Focus RS limited-edition hot hatch adds a few commonly requested features that include a unique interior and exterior styling, and a new mechanical limited-slip differential. The changes to the interior however are limited. This version was first launched in the North American Market.

To really excite driving enthusiasts, the global Ford Performance team developed a standard mechanical Quaife limited-slip differential for the front axle that further improves Focus RS performance. This limited-edition Focus RS will carry greater speed through a corner on the track, to allow for maximum acceleration on the way out.

Focus RS Drive Modes include Ford-first drift mode for controlled oversteer drifts under circuit conditions, and launch control for ultimate performance off the start line posting 4.7-second 0‑62 mph acceleration. The car has the same output as before so thats 340bhp and It is priced at £35,795, available to order now.