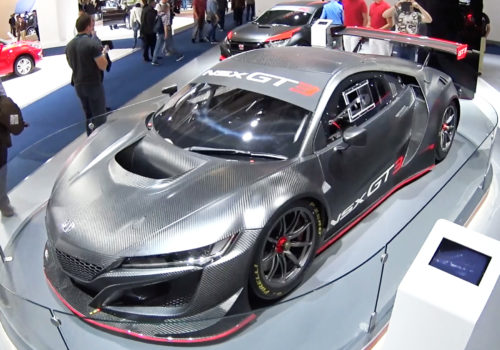 Introducing the NSX, a four wheel drive twin turbo 3.4litre V6 producing, with the 3 Electric motors, a combined output of 573BHP. However it weighs in at 1750kgs and costs £132000. One way to view the NSX is as a junior 918 Spyder. Same principles apply with a load of automation, from electronic steering to electronic brakes.

Providing the power is a twin-turbo V6, putting out 500bhp and 406lb ft of torque. In addition to this is a direct drive electric motor situated between the engine and the nine-speed dual clutch transmission.

This electric motor generates an additional 47bhp and 109lb ft of torque but there are also a further 2 electric motors on the front axle, one on each side putting out 36bhp at and 54lb ft.

As well as magnetic ride dampers, the NSX’s handling is helped by it’s All-Wheel Drive System. A key component of this is the torque vectoring available using the twin motors at the front. The limited-slip differential on the rear axle is also brought into play to create something called Direct Yaw Control, which helps make the car (1725kg) feel much lighter than it is in reality.

At first glance, the construction of the car is not particularly advanced, with no carbonfibre to shout about. However, there is a world-first application of ablation cast aluminium. It has the stiffness of a normal casting and the ductility of a forging, which means the parts can be used as attachments points for the suspension.