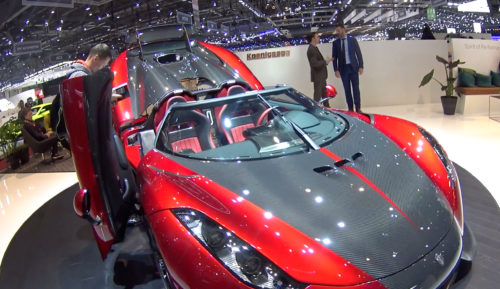 The Regera is Swedish for “to Reign” – a suitable name for a machine that offers an unforeseen combination of power, responsiveness and luxury. In spite of all its advanced technology and creature comforts, the Regera is comparatively light and can still perform competitively around a race circuit, 3.2 seconds between 150 to 250 km/h and under 20 seconds from 0 to 400 km/h. The Regera weighs in at 1500kg, a remarkable achievement.

The Regera is handcrafted in an edition of just 80 vehicles at Koenigsegg’s production facility Ängelholm, Sweden. The heart and soul of every Koenigsegg is its Internal Combustion Engine – the ICE. The ICE of the Regera follows the path of its siblings, the proven and extremely reliable Koenigsegg dry-sump twin turbo, DOHC, 5.0 litre V8.

The new Koenigsegg Direct Drive transmission (KDD) was invented by Christian von Koenigsegg and developed for the Regera by the Koenigsegg Advanced Engineering Team.