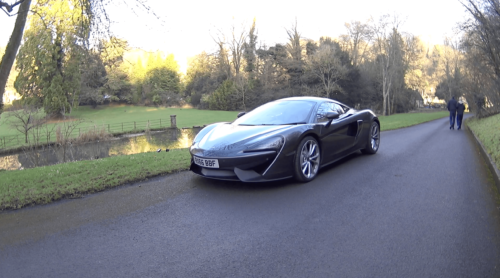 Here at ss8000cars we are pretty excited because we have the McLaren 540C on loan for the next four weeks or so. This follows on from our test of the 570GT late last year which I thought was a tremendous machine but I also thought fell between two stools, it neither had quite the suppleness required of a proper GT, i.e. useable every day, nor the last tenths of body control available in the 570S.

The 540C is the entry model in the McLaren range, it has a compliant suspension system, 30HP less than the 570S which you simply do not notice in every day driving. The same 3.8 litre Twin Turbo V8 propels the 540C and this car really is supercar fast!! However it is also useable every day notwithstanding that you still have to climb over the McLaren’s Carbon MonoCell to get in and out of the cabin.

I feel the suspension in this car is perfectly judged and if if your emphasis is on city or long distance driving you will appreciate the genuine comfort on offer without, as far as I can tell, any compromises to be made in the handling department.

The 540C engine produces 540hp or 533bhp at 7500rpm. 0-62 is dispatched in 3.5 seconds with the 100mph mark coming up in 7 seconds dead when the car is truly getting into its stride. 0-124mph comes up in 10.5secs. This is true Supercar fast and In the real world this is all the performance you will ever need. The car would stay easily with a GT3RS Porsche in a straight line which has a 0-124mph time of 10.9secs. In fact we had the two cars together on the drive last week.

As mentioned McLaren has stuck with the Carbon MonoCell on the Sports Series which keeps the weight to a minimum, 1350Kg, and provides great rigidity which is clearly noticeable in the car in the way it drives. There is no roll even thought this car uses a more conventional suspension with anti-roll bars than McLaren’s now famous automated hydraulic system found in the 650S.

A big thank you to the management at ‘The Manor House Hotel’ at Castle Coombe who allowed us to film the 540C at this Wonderful location. It was greatly appreciated!! Visit The Manor House to receive a very special experience.