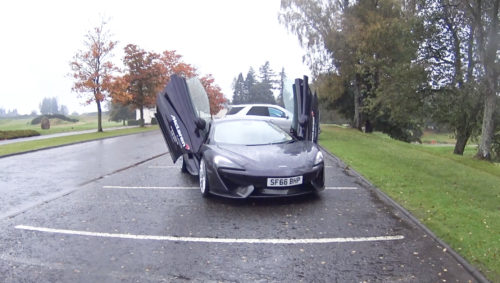 The 570GT caught my eye when announced because it was billed as the ‘softer’ version of the 570S announced perhaps a year ago. This car is McLaren’s first real grand tourer in the strict sense of the word. A car that can provide amazing track performances but at the same time allow you to travel from London to the South of France in one hop and emerge relatively fresh!

The car is so fast that it is likely that it would show a clean pair of heels to both the Porsche Turbo S and the Audi R8 V10 in the dry, these are the McLaren’s closest competitors, and 570GT provides the best feedback of all these cars and is better balanced than the Porsche being a mid engined car alongside the Audi. When I drove the R8 I was disappointed in the feed back emanating from the steering making it a difficult car to place accurately in the corners but I have to say the Audi just pips the 570GT for pure noise probably, the V10 being completely epic. In inclement conditions the Turbo S provides the extra security associated with four wheel drive and would pull away, but even here the McLaren would not be far behind, a consequence of it’s sublime balance.

The 570GT doesn’t have the fully interlinked hydraulic suspension of the 650S having to work with adaptive dampers and anti-roll bars, but the results are magical and McLaren’s engineers are to be congratulated on having produced the best handling car in it’s class imo by some margin!

All McLarens use the Carbon MonoCell Chassis which is both lighter and stronger than a conventional aluminium chassis, such as used in a 488 GTB Ferrari and the dihedral doors, opening upwards, add a touch of drama.

To conclude I think that the 570GT may just be the pick of the McLaren range doing 90% of everything a 650S can do for a more reasonable price!! It is the car that also scores greater than 90% in all departments and I cannot see this domination being challenged in the near future which is some result for a car company born only five years ago.

Thanks for watching and please make sure you subscribe now to see further videos of the McLaren range when they are released and there are quite a few coming! Part Two of the 570GT Collection is up next weekend.