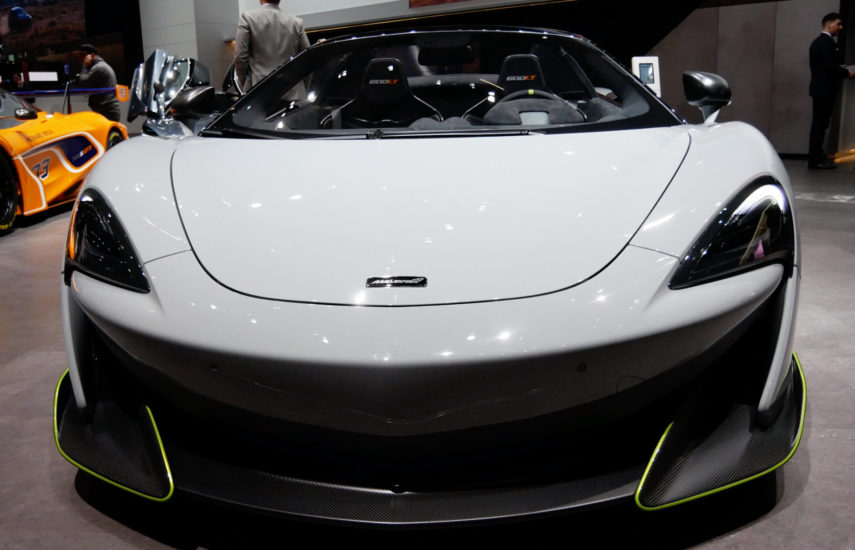 On to the McLaren stand at Geneva. Really is my personal favourite of the Supercar Manufacturers and that says something because the new Huracan Evo is a wonderfully accomplished car with it’s naturally aspirated V10 engine and Ferrari is at the top of it’s game with the new F8 Tributo. Also watch out for Aston Martin who had not one but three mid-engined super and hypercars. One of them, the Vanquish Vision Concept, a car that will compete head on with the all these cars. This company with Red Bull as their partner is moving mountains currently.

As befits an LT model the 600LT is around 5cm longer than the 570S, this mainly from a more pronounced front splitter and extended rear diffuser which also improve the aerodynamics of the car combined with the new fins, one at the front, two on the side skirts and one on the rear diffuser. However there are no real changes in the mechanicals of the 600LT Spider. So we have the same 3.8-litre twin-turbo engine found in the 570S with a remap and the shortened exhaust system adding up-to 592bhp and 457lb ft of torque. The 0-62mph time is 2.9sec so the same as the coup, and 8.4secs to 200kph a few tenths down.

Suspension wise the Spider is identical to the coupe: so the same forged wishbones, recalibrated dampers and suspension geometry wider tracks, firmer engine mounts, lighter brakes and wheels and a quicker steering ratio. This combined with weight-saving measures, such as thinner glass, lighter exhaust componentry and more carbon, means the 600LT Spider is 100kg lighter than a 570S Spider at 1404kgs..

One of the biggest difference with all McLaren cars is that the transition to Spider does not affect the rigidity of the car because the car has McLaren’s Carbon Monacell 2 chassis and If there is a difference between the two when I drove both the Coupe and Spider 570S I didn’t notice it, maybe on the track when pressing hard but I find it difficult to imagine that a non-race driver would notice.

Having watched EVO’s eCoty 2018, the 600LT won, it was obvious that this is a car that excites both on the road and on track. Whether the additional noise that enters the cabin due to the inevitable lowering and stiffening of the suspension with the car’s wider tracks I cannot comment on at this stage but I am looking forward to driving this car to find out. It is perhaps the noise that prevents me using our 675LT more. Either way the 600LT is a car with a very high level of ultimate performance and EVO said that ‘feedback through the steering wheel is outstanding, and the car always feels super agile, without being nervous, while the brake feel and iron-grip damping composure give drivers immediate confidence’. Praise indeed

Without a doubt the noise that emanates into the cabin, with either the roof tucked out of site or with the roof in place and the rear glass deflector down, is hugely increased but if there was a criticism of the 600LT it would be that the engine noise that you get from the Twin Turbo V8 is still not raucous enough but I have to say the pops and bangs from the exhaust almost make up for it..

With the car’s lowered and stiffened suspension it should make a prodigious track car especially if fitted with Pirelli’s new Trofeo R Tyres, and an very accomplished road car, cabin noise aside. At 201K the 600LT Spider even seems remarkable value for money undercutting the F8 Tributo and GT2RS by a margin, though these cars are more powerful none are likely to be better track cars.