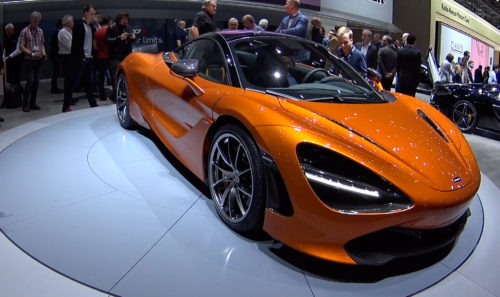 McLaren have achieved the seemingly impossible, within a five year period of launching their first car in the Super Series category, the car that came to be known as the 12C and then the 650S, has now been replaced. McLaren have launched the 720S at Geneva. Long live the king!

And yes this car’s name does refer to the hp output of the car! All from a 4 litre capacity engine with the customary 8 cylinders and a twin turbo in support. Ferrari’s recently launched 488 GTB does seem to be a way behind the curve now having only 661hp. Doesn’t that word ONLY sound strange. Only 661hp, more than an Enzo the Ferrari HyperCar of not many years ago.

But the 720S is much more than just a fast car it has real downforce. The rear airbrake covers the entire width of the car as in the 675LT, a car that renowned journalists believed was the only car of it’s genre in which you could genuinely feel the downforce produced.

The car is much airier than the 650S with glass roof panels and windows in the rear that sweep from side to side giving a panoramic view to the rear. The air intake covers in the side of the car are gone to be replaced with air channels in the doors that feed air in much the same way as the 650S into the engine to provide much needed cooling. This is achieved by having twin skinned doors so the air can be collected and fed to the engine through the doors themselves and even the headlights also act as conduits to capture air and send this force under the car to provide stability.

All in all a genuine ‘tour de force’ the 720S and I predict it will be a sell out!