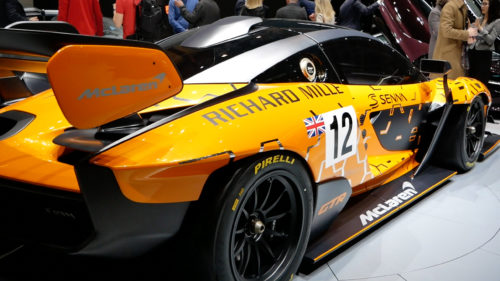 “The track-only McLaren Senna GTR will have more power, more grip and more downforce – up to 1,000kg – than the McLaren Senna and post faster lap times. The limited number of customers who secure this car will be buying the closest experience you can get to a race car without actually lining up on a circuit grid” Mike Flewitt McLaren CEO claims.

The GTR gets the same 4.0-litre twin-turbo V8 as the road-legal Senna, remember this is sold as a completely track-focused car. The regular Senna produces 789bhp.. It is likely that the GTR will produce a minimum of 814bhp.

Details are somewhat scarce but the GTR should weigh in around 1,198kg, which if so would be the same as the regular Senna. Changes over the regular car include a revised suspension, slick tyres and a ‘race-style’ transmission.

The styling on the Senna has always been a controversial element, all or nothing aerodynamics definitely affect its overall looks but to these eyes the looks are brilliant BECAUSE the car is so focussed. The GTR is actually probably better looking that the Regular car because on a race car the extreme aerodynamics are accepted. By really committing to the requirements for circuit performance, the GTR looks like a pure race-car. Let’s hope the car finds a race series because without it you have to ask why make it so extreme!

All 500 regular Sennas were sold before the car was officially announced therefore I imagine McLaren will have little problem in selling the 75 or so GTR’s to be produced. £1million plus taxes is what it will cost you and it is said that the show model is the only car available but this was not confirmed.