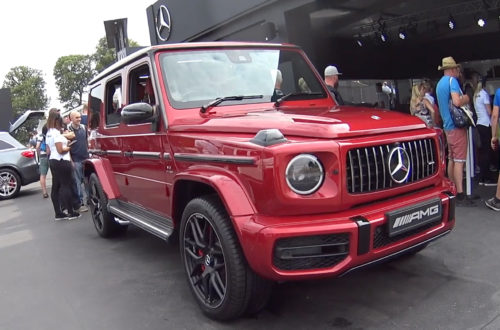 Hey Guys, I give you the new Mercedes AMG G63. The car that replaces the old G Wagon which has been in production since 1979. This car last year sold more units than at any time in the car’s history.

In addition to the modernised front axle with its vastly improved new steering, there’s a new rigid rear axle that’s placed by four trailing arms to resist lateral movement. Undoubtedly there is body roll but in the new G-Class that you can accurately predict when that point will happen. Be patient on corner entry, and smooth, and you can get the G63 to adopt a rear-led balance.

However in reality this car is meant to offer old-fashioned fun and the figures suggest that it is ludicrously quick. The decision to adjust the torque split from 50:50 to a rear-biased 60:40 has certainly benefitted the dynamics.

The AMG G63’s engine is a 4.0-litre twin-turbo V8. Tuned for a two-and-a-half-tonne off-roader, it develops 577bhp at 6000rpm and 627lb ft at 2500-3500rpm. Top speed is 137mph, though it is the 0-62mph of 4.5sec that is the most noticeable. The engine operates through a Mercedes 9G-Tronic torque-converter transmission and while not quite as vocal as the 5.5-litre to be found in the previous generation, is well up-to the task!

Ride quality is dramatically improved over the older model. All G-Class models use adaptive suspension, switchable through several modes, and while there is a degree of low-frequency jostle, it’s subtle enough that you really could this car as a long-range cruiser. Barring the odd clunk from a differential and not inconsiderable wind noise, usability and refinement are now an important factor in the G-Class package.

The other fundamental change to the G-Class is found within the interior. The architecture retains an old-school feel with its squared-off panels, but you now have two 12.3in displays mounted side by side as in the current S Class and it all feels classy and roomy as befits its £143K price tag.

Off-road capability is also particularly accomplished, this is a car that can take you anywhere, just as before. In the interests of increased precision on challenging terrain, the damping, steering, gearbox and throttle-response characteristics alter to give the G-Class the best chance of scaling whatever obstacles lies in it’s way.

All in all if you are in the market for this type of car then the AMG G63 is worth serious consideration – now definitely a worthy Range Rover competitor.