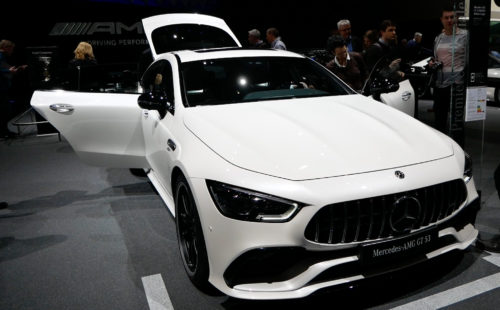 A car that we reported on at Frankfurt but was called the GT Concept has emerged as a production model. At Frankfurt I said if it was put into production anything like the Concept car then it would do extremely well. Here it is then and it is very close to the original design. Time will be the judge in how well it sells but it deserves tremendous success imo.

So here we have the AMG GT 4 Door. Very cohesive design and particularly aggressive in 63S stance. The range so far starts with the GT53s which is a turbocharged 3.0litre in-line 6 cylinder engine and has a 48V electrical system which is not used for electric propulsion alone but to supplement the power in the mid to top range providing an extra 22bhp. Power output is 429bhp and the weight comes in at 1970kg.

Then comes the GT63 which is available in 2 guises, the regular 63 which has a 4.0litre V8 engine producing 577bhp, and the big daddy of the range, the 63s, which has the same basic engine as the 63 but now produces 630bhp. All the cars on offer have 4Matic transmission and four wheel drive.

The styling is spot on and is beautiful and aggressive in equal measure. However if there is a fly in the ointment it is that both the exterior and the interior are reminiscent of the Mercedes CLS which is in itself quite a bit cheaper and runs the 53s engine. For marketing reasons Mercedes has decided not to put the 63 engine in the CLS, as they did with the previous model, a sure sign they also are aware of the products similarities and the danger this poses when justifying a huge price increase for the bigger car.

The competitor targeted by the GT is clearly the Porsche Panamera which is in it’s second version of the product and is also a quality item. Mercedes are rumoured to be preparing a hybrid car with 700 odd hp which would complete the range and compete head on with the Porsche Panamera Turbo S e-Hybrid. Roll it on I say.