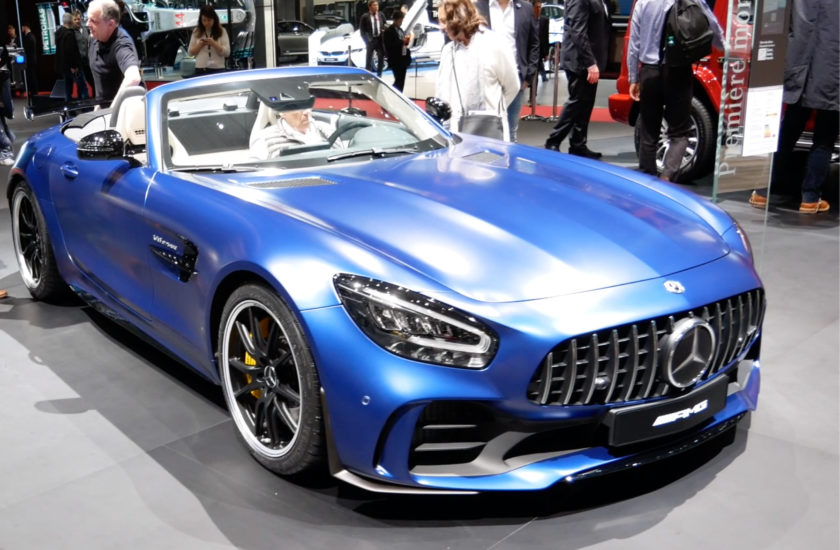 Interesting how even Mercedes can be persuaded to build a car that was not intended from the start, in this case the AMG GTR Roadster, if people demand it. Think about it, this is a hard core track version of the AMG GT, itself an out and out sports car, and Mercedes have cut the roof off. Contradiction in terms? Possibly but when the end result looks this good. Bring it on we say!!!

Mercedes have removed the roof before with the GTC and this car already has the widened arches of the GTR so we did know what to expect but the added hard-core nature of the ‘R’ gives the styling, even over the GTC, an added note of aggression that perfectly suits the GTR Roadster and combines this with the beauty of the GTC making imo a great overall package and AMG are limiting the numbers to 750 so this car will not greatly impact the track orientated reputation of the car. And anyway AMG have now announced the GTR Pro an even more focussed version so now it all seems to make sense.

The GTR has always been a great car but the interior rather let it down. Manufactures do not seem to cope with the rate of change in the infotainment world and struggle to keep up so systems launched even last year can look outdated. Here we see Mercedes latest version which has a new central 12.3inch screen for infotainment and management of the cars diagnostics. The drift control has moved here and is selected by a control on the steering wheel. There is also an improved drivers screen which can be largely set up the way you choose but is intended for the speedometer and rev counter. The centre console controls have been passed over from the new AMG GT four door and I think is the weakest link looking a little crammed at the rear with the gear selector especially which is positioned too far back to access easily. However on balance the interior’s a resounding success I should say and overall a nice place to be.

Otherwise the package is unchanged from the GTR Coupe except with additional measures to ensure the overall rigidity of the Coup is retained and this means the same tried and tested 4.0 litre Twin Turbo V8 motor kicking out 568bhp and passing through a seven-speed dual-clutch gearbox direct to the rear wheels. AMG claim 0–62mph in 3.6 seconds going on to a top speed of 196mph.

This is the first GT model I would consider for myself because I feel you could easily daily this car, and what a daily car to own!