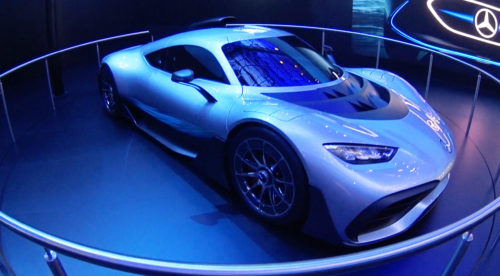 We travel to Frankfurt for the bi-annual car show in the heart of Germany. Hall two is dedicated to Mercedes Benz and the star of the show is undoubtedly the Mercedes F1 Hypercar – Project ONE.

The car’s powertrain is closely related to Mercedes’s F1 engines. It uses the 1.6-litre turbocharged hybrid V6 that powers the German team’s F1 car, and although the car is officially a concept, Mercedes says it is very close to the upcoming production model due in 2019. The cost……………..V close to 3 million Euros.

Project ONE is a plug-in hybrid and the drivetrain uses a turbocharged V6 hybrid engine with four electric motors. One of the electric motors forms part of an electronic turbocharger in a bid to reduce turbo lag, while the other three are linked to the crankcase to supplant the 1.6-litre engine’s output with an additional 161bhp, feeding off excess energy from the turbo system.

Mercedes claims a target output of over 1000 hp, and the unit will rev to 11,000rpm. In terms of outright performance, a top speed in excess of 217mph is claimed, and expect a 0-62mph in less than 2.5 seconds, maybe nearer the 2 mark.