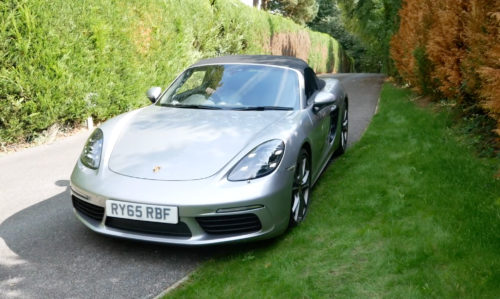 The Porsche Boxster, with it’s hard top sibling, is the entry point into the Porsche range. Introduced first in 1996 just in time to bolster Porsche’s finances. There have been three generations prior to this, this latest version now called the 718 Boxster.

Some say the Boxster saved the company and this may not be overstating it’s importance but whether or not this is true it has been responsible for Porsche’s dominance in this sector and until the arrival of the new Alpine A110 has been without a doubt the best out there and by a margin.

However Porsche’s decision to drop their 6 cylinder engines and promote 4 cylinder power for the latest 718 has in the opinion of this writer at least handed an opportunity to the rivals. We had the Cayman GT4 and the engine in this was wonderful. When compared to our Golf R the engine in the 718 is terrific, when pitched against the old engine it is nowhere, except perhaps in outright power. The 718 badge is from Porsche’s racing past.

You can opt for PASM adaptive dampers (accompanied by shorter springs for a 10mm drop in ride height or on the Boxster S PASM Sport, standard on the GTS, which makes the suspension stiffer and lower again.

The flat four engine responds with great enthusiasm, in all gears. all credit to Porsche for all but eliminating turbo lag, there is a momentary delay, but it’s minimal, and the unit’s enthusiasm from 2000rpm onwards is quite startling.

All of this makes the 4 pot unit a good one especially in 2 litre format. However whilst as good as or better than the 4 cylinder engines of it’s competitors, a worthy replacement for it’s predecessor it is absolutely not!

The Boxster makes a virtue of its mid-engine balance, it changes direction fluidly and provides the benchmark for how an open two-seat sports car ought to feel. However the chief differences between the 718 and its predecessor are the breadth and depth of its adaptive ride quality and the sharpening of its chassis.

In the PASM’s softest setting, the Boxster makes light work of the most uneven UK roads. The 10mm suspension drop barely troubles wheel control even with optional 20in Carrera S wheels fitted and the Boxster’s stiffened chassis lets you lean ever more deeply into delivering seemingly endless grip and poise. As a generator of composure, and the playful confidence that comes with it, the Boxster remains unparalleled and Its performance on the Pirelli P Zero tyres was redolent of our Cayman GT4, a car that completely refused to become unstuck in corners and still remained brilliantly driveable.

Prices start at 45K for the base 718 model, and the one tested here, rising to 62.5K for the GTS before extras.

Did we like it? Engine aside, we thought it incredible and still the best out there. Though we have not driven the Alpine A110 yet.