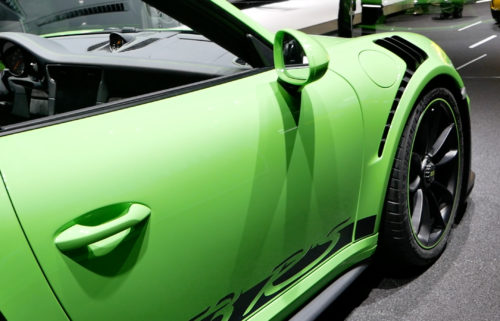 The GT3RS 991/2 was unveiled a few weeks before the International Geneva Motor Show. With a price of £141,346, and first UK deliveries in April, the new 911 GT3RS gets an additional 20bhp from Porsche’s racing 4.0-litre six-cylinder engine taking it to 520hp. However don’t get any ideas about ordering one now because they have all been allocated for at least the next year. Expected prices to far outreach the list price if you want one in that timeframe.

Andreas Preuninger, GT boss at Weissch, confirmed that the engine produces more power than 520hp claimed. Though Andreas has said this of previous GT models we believe him because it is the German way, to be conservative, and he says In racing trim the engine can make more than 600bhp giving them a fair amount of lattitude.

The RS’s engine is mated to Porsche’s seven-speed PDK double-clutch transmission and, unlike the regular GT3, there is no option to have a manual gearbox. 0-62mph time comes up in 3.2sec and top speed is now 194. Despite the car having an extra 20hp over it’s predecessor, these figure are to all intents and purposes the same.

Any changes you might have expected on the new model do not appear on the outside, these being limited to new ducts on the front bonnet cover and the option of the Weissach Pack which changes the standard magnesium roof to carbon and introduces magnesium wheels all in the name of weight saving which makes around a 30kg saving on the standard car. Don’t get excited though you will not be able to opt the Weissach Pack until the end of this year suggesting that there may be emission differences between the a non Weissach Pack configured car and standard.

However this RS has the same spring rates front and rear as the recently announced GT2RS. This being the major difference between the 991 RS and this model. At the front the spring rates are double that offered on either the current 911 GT3 or previous GT3 RS and the rear spring rate has also increased by 40%.

All RS’s are fitted with carbonfibre front wings and bonnet and, as mentioned above, ducts in the bonnet and a magnesium roof. This RS also takes the new front and rear bumper design from the current 991/2 GT3 but many of the aero features are enlarged to reflect the requirements for additional air flow.

Preuninger says all these modifications combine to deliver a weight target figure that should add up to a significant improvement in the Nürburgring lap time. We shall see!?! Will Porsche bother posting a time when the GT2RS recently blitzed the production lap record by five seconds to post a 6:47 time and this GT3RS is unlikely to trouble it?

Either way this is definitely one of my favourites of the show and with the suspension mods and weight saving all combine to making this one of my three most exciting cars of late 2017/ 2018. At least so far!!!