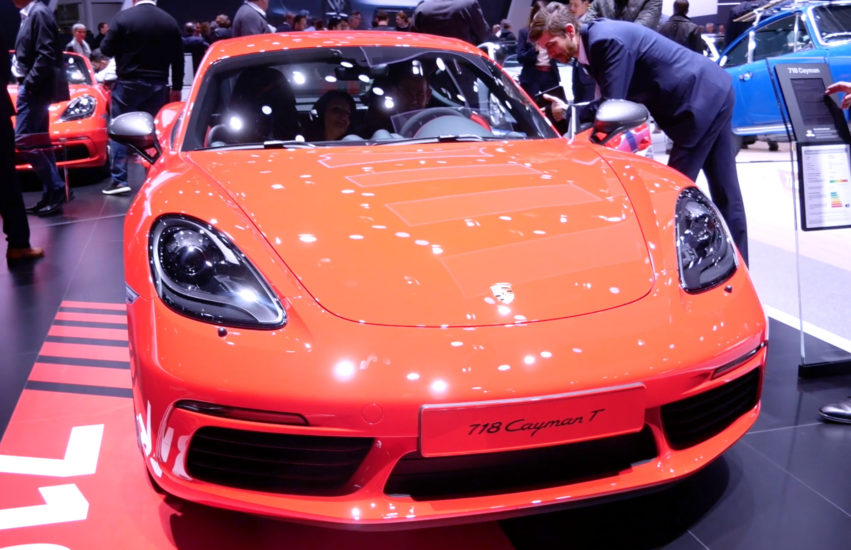 The Cayman T is basically a standard Cayman with those extras specified as standard that you would most associate with a fully specced sports version. With the mid-engine 2.0-litre flat four turbo engine from the standard car, the T gets Porsche Torque Vectoring including a limited-slip differential, Porsche Active Suspension Management with a 20mm drop in ride height, Porsche Active Drivetrain Mounts, Sport Chrono (incorporating a customisable driving mode and an intermediate setting for the stability control) and 20in wheels. Interestingly the 20mm drop in ride height is 10mm more that can be specified on the standard car giving added aggression to the T.

Of course all this equipment can be specified on a standard Cayman, but here it is bundled in and therefore works out cheaper than specifying the individual components on the standard car. You also get decals on the side of the car, fabric loops for door pulls, and grey mirror housings, so all in all the Cayman T is comparatively good value for money.

What is not changed in any way is the basic Cayman’s engine, so maximum power of 296bhp at 6500rpm, with 280lb ft of torque. A six-speed manual gearbox or seven-speed PDK transmission can be chosen, so again Porsche are to be applauded for giving customers the choice. The PDK specified T gives a 0-62mph time of 4.7 sec with the sports-chrono package and a 171mph top speed.

However what this car is not is a stripped out or lightened version of the standard car which is in some ways a pity. In the 911 of the same name the rear seats could be removed and thinner glass specified. So the driving experience in the Cayman T is likely to be similar to the standard car.

That said the 911T from last year has set the example and this car, in spite of not offering anything, from a technical perspective, over the standard Carrera was the more alluring driving machine. Somehow greater than the sum of it’s parts……………Is this true of the Cayman T?

Unfortunately we haven’t driven the Cayman T but we did drive the 911T. And Autocar says ‘everything that makes the basic Cayman fun to steer along a twisting road also applies here. The steering is so well judged and so brilliantly keyed into the front axle that you guide the car instinctively from the first mile onwards. The wheel never wriggles or fidgets in your fingertips, but you always know how much grip you have available and you can position the car with real accuracy’. High praise!

The Cayman T has a starting price is £51,145, which is around £700 cheaper than the Cayman S. The S version is also the more powerful car, by 49bhp, but with the options specified that are standard on the T would be considerably more expensive.

You pays your money, you takes your choice!