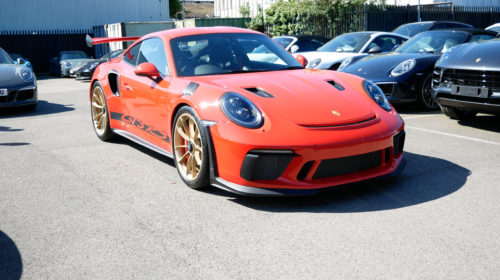 This RS had more power than it’s predecessor but it was more than this, it is a mix of Porsche’s most extreme road cars, the GT2 RS, and the all-conquering racers, the GT3R and RSR. The Rose-jointed rear suspension with helper springs came straight from the GT2 RS, the engine courtesy of the race cars. A new aero pack provided additional downforce.

The suspension has been tweaked for the car using bespoke spring rates, but in reality much is carried over from the previous GT3 RS, the gearbox and ratios, the steering, brakes and tyres . Weight saving was paramount, the carbon bonnet and front bumper for example, so with ceramic brakes the GT3RS 4.0 weighs in at just 1360kg.

If previous GT3s, and current ones to a degree, have an issue it is an engine that has to be revved to beyond 6000rpm to make it really fly. This combined with wider than needed gear ratios can leave you waiting for the power to arrive. The engine in this car has a wider useable rev range so, those wide gear ratios suddenly make more sense.

The result? Autocar named this car as their best driver’s car in Britain for 2010.