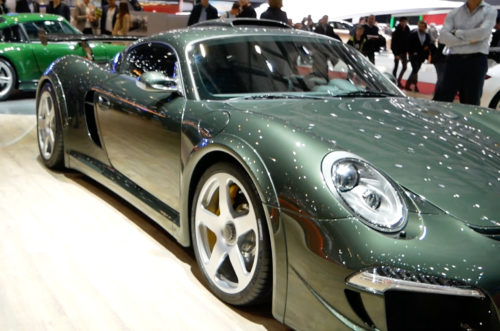 No Geneva Motor Show would be the same without a trip to the RUF stand, we missed it last year for some reason. RUF have been modifying Porsche 911’s for over 35 years. Today RUF are a manufacture in their own right, although always based around the Porsche platform but highly modified.

Alois Ruf started making 911s go faster in 1977 and he became extremely adept; his designs were so advanced and went so deep into the core of the cars’ construction that he was recognised in Germany as a standalone car manufacturer with the right to give out his own VIN numbers back in 1981 (1988 in the US). The RUF 911 came out in 1987 but it is the Ruf CTR (for Group C) that you might recognise by the name of Yellowbird from the title of the world’s fastest street legal car (212.5 mph) in 1987.

After 40 years of RUF Turbo production we now have the RUF RtR with the trademark air intakes behind the rear arches. This 911 based machine has a hand crafted chassis which displays a dynamic appearance. Torsional rigidity is delivered by an Integrated Roll Cage which enhances the handling dynamics. You can choose either two or four wheel drive. The RTR has a motorsport rear spoiler to massively increase the downforce with huge carbon ceramic brakes, 410mm at the front. Powertrain is the well proven twin turbo 3.8litre producing 802hp with 720lb ft of torque and features a dry sump lubrication system with an external oil tank. 6 Speed manual only here in 802hp form! There is the option of a 645hp version which can be had with manual or a sequential gearbox. The RtR was available in both ‘Narrow’ and ‘Wide Body’ styles to give the option of either an understated or more aggressive look to the car.

The CtR 3 is RUF’s top model and combines decades of experience with latest technology and timeless design. As a logical consequence of the continuous development of the brand, RUF have a vehicle that enthuses by more than just exceptional technology and driving dynamics: it comes with it’s own individual design. The low and wide front end of the CtR 3 together with the steeply rising wings form an athletic appearance. With the specific design of the wings and a very low a-pillar the pilot of the CtR 3 has the perception of being very low in the seat position which enhances that race car feeling.

Underneath the carbon skin various high performance components are in evidence. The turbo charged flat 6 engine produces an impressive 777 hp and has a torque of 980 Nm (723 lb ft). This power is transferred to the rear wheels via a 6 speed manual or an optional 7 speed double clutch sequential box. The mid-engine coupe has an extremely low centre of gravity aiding the handling characteristics. The rear axle construction includes horizontal springs and shock absorbers. The CtR 3 Clubsport sits at the top of the pile and comes amongst other details with wheel house extensions and a fixed carbon rear spoiler.

RUF say ‘Sports cars do not necessarily need to be without compromise. drivability, longevity and reliability – in all life situations – this is what RUF stands for. Our sports cars combine maximum performance, suitability for everyday use and personality. Driving pleasure is guaranteed – no matter if in an open top Roadster or in a Coupé model’.